5. The Battle of Naseby 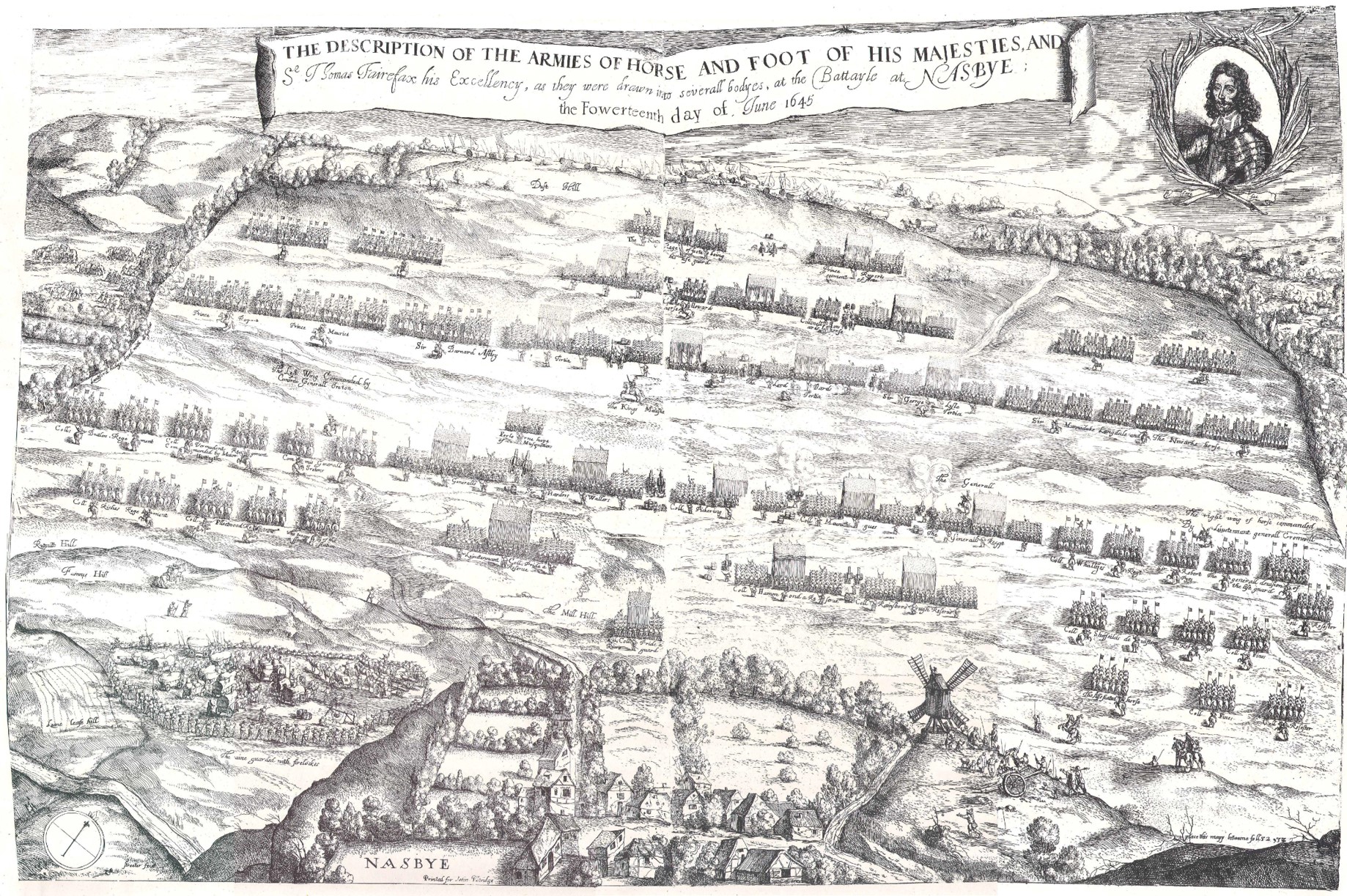 Above: A drawing by Streeter prepared shortly after the battle gives us lots of information as to the disposition of both armies.

The start of the battle…

Cromwell sends Colonel John Okey and his dragoons to Sulby Hedge to harass the Royalist right flank (see map – Sulby Hedge Viewpoint). Their fire power may have forced Rupert to advance prematurely.Rupert’s horse advance at a slow trot, pausing in the bottom of the valley. Ireton’s cavalry advance to meet them. The two sides meet and three of Ireton’s regiments break and are put to flight, with Rupert’s men in pursuit.

The Royalist infantry in the centre advance across the valley floor and up the slope towards the New Model Army, (see map – Cromwell Monument Viewpoint) standing just beyond the crest of the ridge. The weight of the Royalist assault falls on the left hand regiments of the New Model Army, the parliamentarian line pivots and starts to fall back.

Those of Ireton’s horse who have survived Rupert’s charge attack the Royalist flank. Ireton is wounded in the thigh by a pike and in the face by a halberd.

The battle hangs in the balance…

For a while, the Royalists seem to be winning, but the Parliamentarian second line fill the gaps and strengthen the weaker regiments. Those that have retreated rally and re-join the battle. Soon the greater parliamentary numbers begin to tell and the Royalist infantry begin to fall back.

On the eastern flank Sir Marmaduke Langdale’s cavalry, hemmed in between the rabbit warren and furze-covered bog to the east and Fairfax’s infantry to the west, charge uphill but do not break Cromwell’s men who take heavy casualties but thrust them back. Having defeated Langdale, the majority of Cromwell’s men turn left to assault the flank of the Royalist infantry. At around the same time, Okey’s dragoons leave the safety of the hedge and hit the Royalists in the opposite flank.

The Royalists are now being assaulted on three sides. Soon they began to retreat. Many give up and surrender but Rupert’s own infantry regiment, the Bluecoats, stand firm. They are finally defeated by Fairfax and his regimental commander D’Oyley. 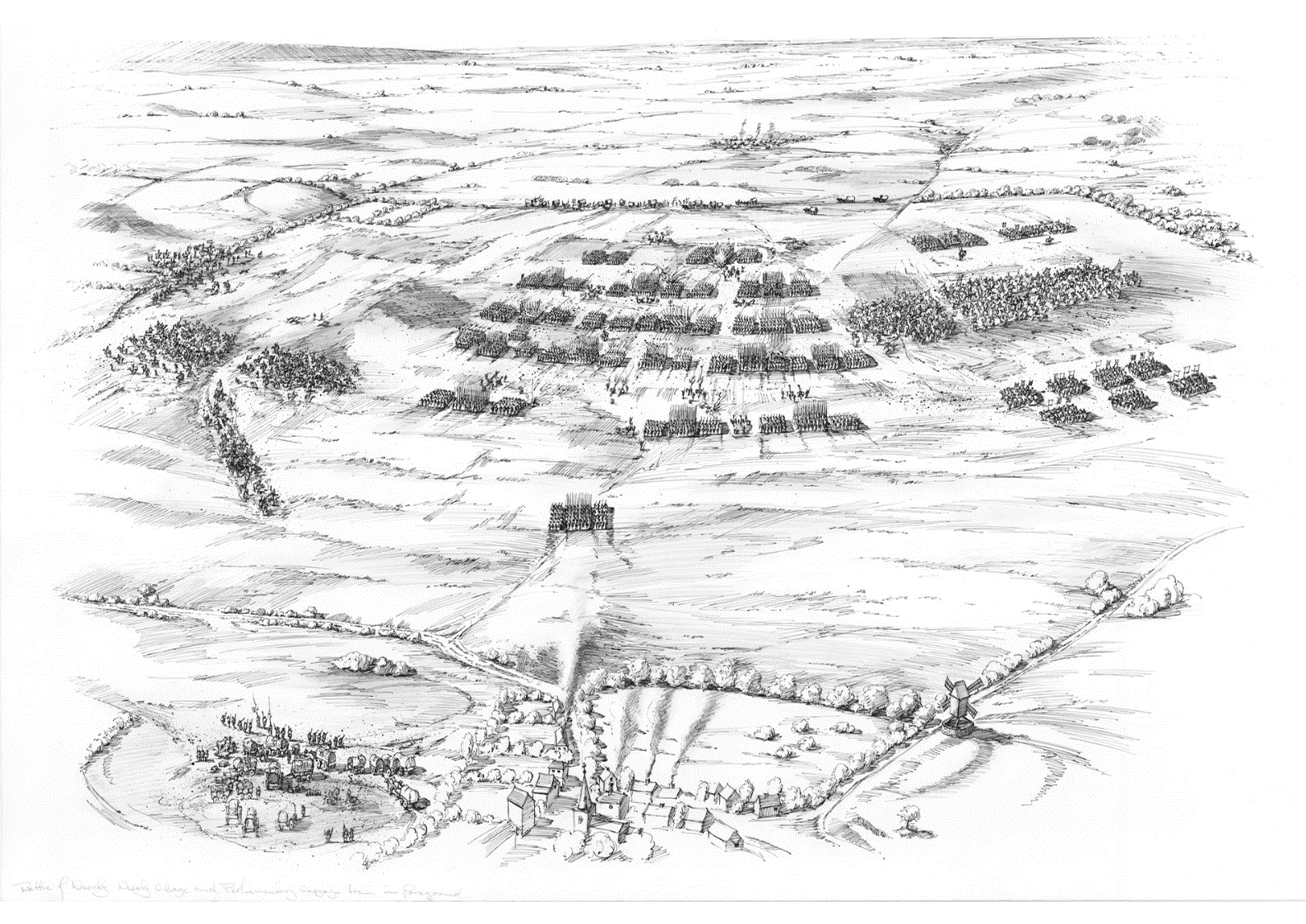 This illustration by Peter Dunn appears to have been based on Streeter’s antiquarian map of the battle. This is part of the Volume: IC069 The Battle of Naseby 1645, Naseby Battlefield, Northamptonshire; within the Series: EHC01/146 English Heritage Reconstruction and Artwork Collection; within the Collection: EHC01 English Heritage(EH):Archive. © Historic England Archive

The Royalist army flees through the deserted village of Nobold towards the Sibbertoft to Clipston road.  Near Clipston Rupert’s Welsh camp followers are mistaken for Irish women and massacred.  Between Moot Hill and Wadborough, the next height to the east, some Royalists make a stand (see map – Retreat, Moot Hill and ROC viewpoints). It is probably here that the King is prevented from launching a counter-attack by a Scottish nobleman, the Earl of Carnwath, who seizes his bridle, saying: “Would you go upon your death?, before leading him away.  The flight continues towards East Farndon, Market Harborough and Marston Trussell.

In the Royalist camp the victorious Parliamentarians find Charles I’s personal correspondence, showing his plans to reinforcements from the Catholic powers on the continent.  Parliament publishes the correspondence as ‘The Kings Cabinet Opened’. 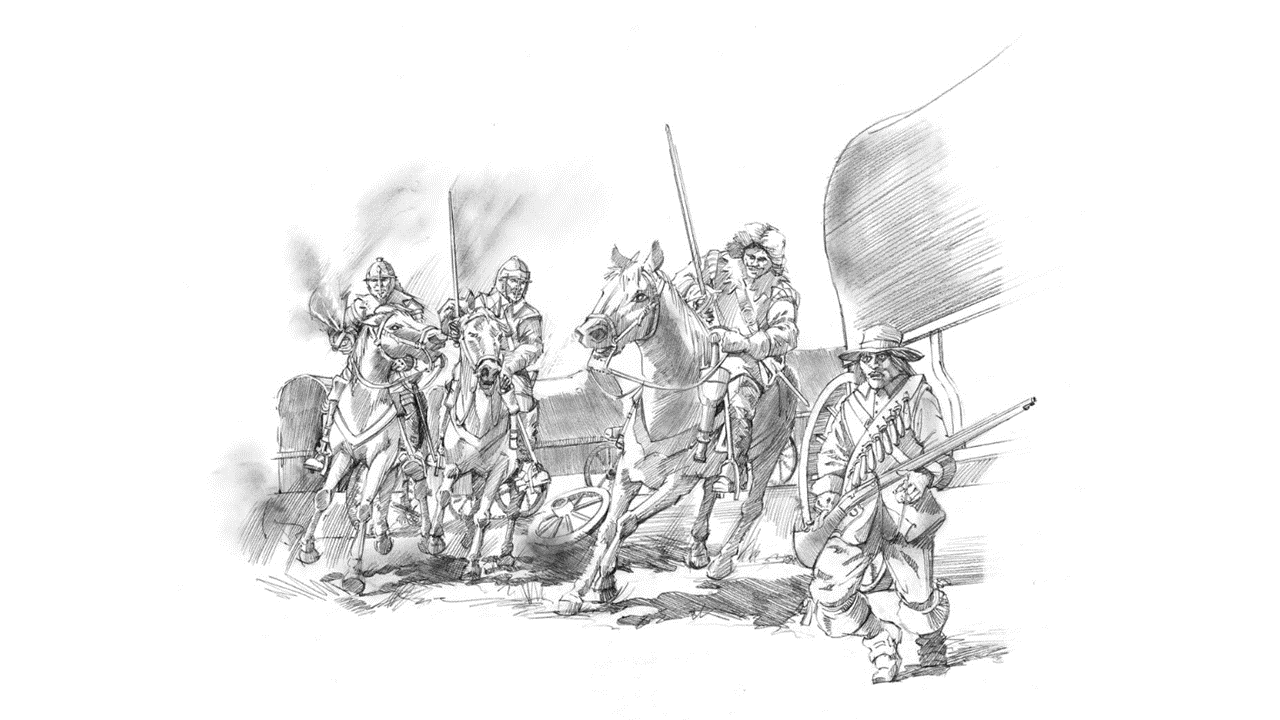 Reconstruction illustration depicting the Royalist cavalry charge on the Parliamentarian baggage train during the Civil War Battle of Naseby on the 14th of June 1645 by Peter Nunn. This is part of the Volume: IC069 The Battle of Naseby 1645, Naseby Battlefield, Northamptonshire; within the Series: EHC01/146 English Heritage Reconstruction and Artwork Collection; within the Collection: EHC01 English Heritage(EH):Archive. © Historic England Archive

The evidence that backs up the story…

The thing that makes Naseby such a joy to look after, is the fact that we know exactly where the battlefield is. Through the efforts of Peter Burton, Mike Westaway and Martin Marix Evans – three of our founding trustees; they have used metal detecting and careful logging of each of their finds to initially discover the battlefield [because its exact location was unclear], and by tying that data to the writings of the time, a full story of the battle has emerged. So much so, we can take you to the location of a specific unit, and sometimes even an individual, based upon this information.

Below we are showing three ‘Fall-of-shot’ maps, which relate to the current battlefield. As you see, the data backs up the story of the battle described above. If you would like to learn more about the battlefield and the stories it tells, why not join one of our battlefield tours – or get a group of interested friends together and we will create a bespoke tour for you! 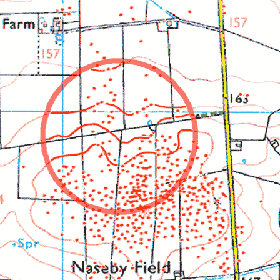 This map shows first contact between the infantry, roughly centred on the modern day Cromwell Monument. 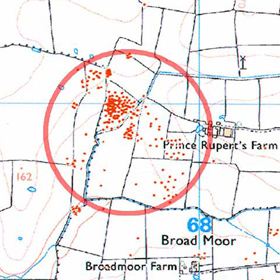 This map focuses on the exchange of fire between Okey’s Dragoons and the Royalist cavalry under Prince Rupert. 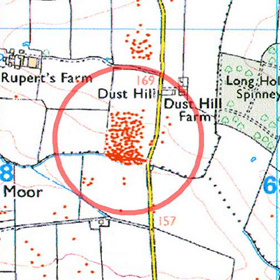 The last stand of Prince Rupert’s Bluecoats? Certainly some bitter fighting in this location.

4. The Generals at Naseby
THE BATTLE HOMEPAGE
6. Aftermath of Naseby