The Naseby Battlefield Project aims to enhance visitor facilities at Naseby battlefield – You can help by becoming a Friend or Benefactor. The vision of the Trustees is that the Naseby Battlefield Visitor Centre will be an information resource about the Battle itself, the Civil War, the political and social history of the era, the rural environment in the 1600s and what life was like at the time. It will place the English Civil War in its proper context in the evolution of modern parliamentary democracy and by doing so put Naseby alongside Hastings, Bosworth and Culloden in contemporary thinking.

Naseby is the most important battlefield in England

On the 14th June 1645 the King’s principal army was eliminated. The King’s cabinet and incriminating papers were captured and within a year, the war was over.  The victory established Parliament’s right to a permanent role in the government of the kingdom.  Naseby was a victory for the army ‘new modelled’ – Britain’s first regular, red-coated soldiers and is, for many, the birth place of the British Army.

As a national monument, Naseby field is unmatched. Despite the addition of farm buildings and the enclosing of fields, the landscape remains intact and has not been built over. There are no uncertainties over the location or orientation of the battle. Today’s visitors can stand on the ground where democracy was won, confident of how the action unfolded. 2015 was the 800th anniversary of Magna Carta … but it was not until Naseby in 1645, that Parliament would establish its defining role in British liberties.

Our vision for the Battlefield at Naseby

The Naseby Battlefield Project’s mission is that visitors to this iconic heritage site have access to the best facilities, information and interpretation. Now is the right time to begin the next stage of our work – please review this website to discover our plans, book a tour, and see what the battlefield already offers. If you would like to support our work going forward, why not make a donation? Please email enquiries@naseby.com and we will forward details and if appropriate a Gift Aid Form.

A TRIBUTE TO MIKE INGRAM M.A. 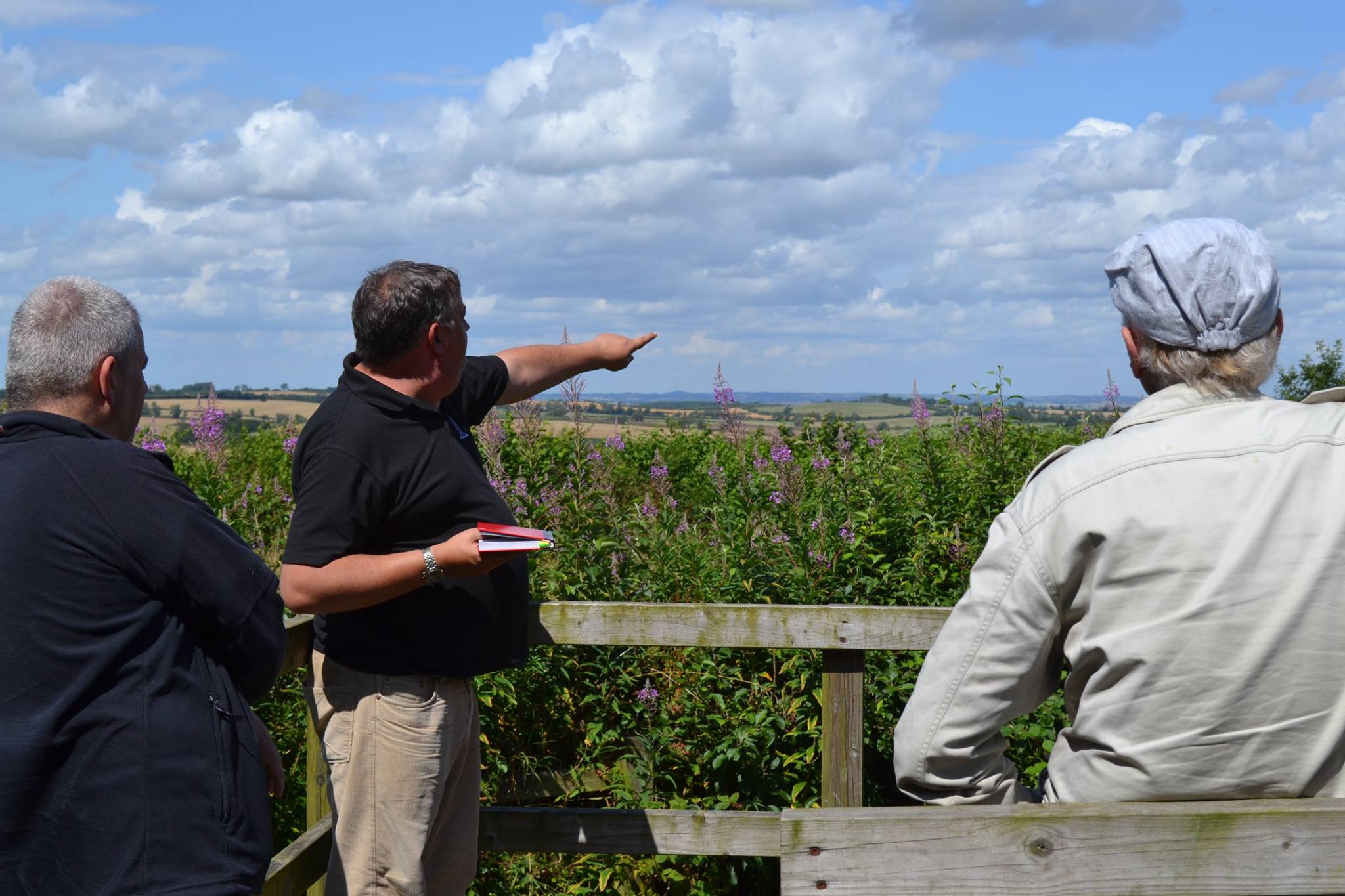 We are very sad to have learned of the sudden passing of our past Acting Chairman, Trustee and friend, Mike Ingram, and would like to offer this tribute to his memory and in thanks for his hard work and support over many years. We have shown him in these images of him, in two of his ‘Happy-Places’ – on the battlefield at Naseby, and as a Freeman of the ancient Borough of Northampton. We would also like to pass on our condolences to his children Finley and Ellen, and also to his parents. 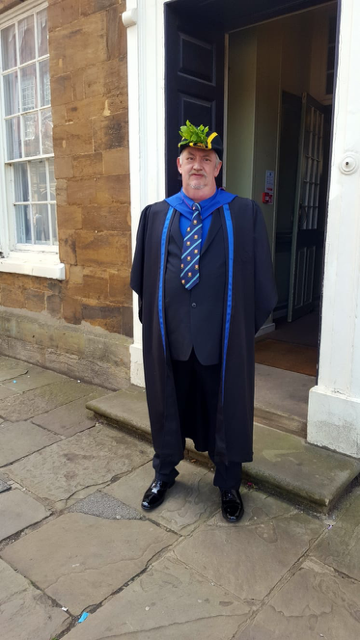 Mike Ingram and I were great friends, fellow Naseby Battlefield Project Trustees, and it could be said that we both have ‘Naseby’ blood flowing through our veins. I can only speak with any authority in the context of Naseby, as we were co-Trustees from 2014 until earlier this year. I know that Mike loved Naseby, and we liked nothing better than to lean on a fence or a gateway on the battlefield and to talk about the battle, the events of 1645, and how the outcome of that battle had changed this nation’s history.

Mike Ingram the professional, held an MA in History from Birmingham University and was a Mediaeval Historian, a teacher, an acclaimed award winning author, a consummate battlefield tour guide, the sitting Chairman of the Northamptonshire Battlefields Society at the time of his sudden passing and, until earlier this year, Acting Chairman and Trustee of the Naseby Battlefield Project. It is of course well known that Mike was an historian with a wide ranging knowledge of all things Northamptonshire and its importance to the history of England. His encyclopaedic knowledge is recorded in his published works:

I first met Mike in January 2014 when he was invited to bring his knowledge and experience to the Board of Trustees for the Naseby Battlefield Project, and that he certainly did. Mike took me under his wing – as an architect and civil war re–enactor I clearly needed to understand the significance of what I was getting involved with, and Mike to this day – through my memories of our conversations, brought the story of the Battle of Naseby alive. We could talk for hours (and often did), with his historical knowledge and my experience of re-enacting, we could explore new narratives and challenge conventions. Mike’s knowledge of the battle was expansive, and he was capable of describing the campaign, the battle, and its aftermath in national, regional and local terms. I know that Mike had ambitions to write a significant book on the Battle of Naseby, to collate all the latest thinking and new evidence that he had found, particularly relating to the events at the end of the battle. I am lucky to have a draft of that chapter, but I fear that is all we will ever know.

During this period of getting to know him, it became apparent that Mike also held an encyclopaedic knowledge of the history and significance of Northampton and its county, and he told me of historic events relating to the villages in which I had grown up. Culworth’s involvement in the Civil War and the notorious highwaymen – The Culworth Gang that terrorised the county for nearly 20 years ending in 1787; and Chipping Warden, now a sleepy village that was a hot-bed of religious fervour under Sir Thomas Latimer, one of the most important patrons of Lollardy in the 1370s. This level

of information was not researched, found, and then reported, it just came straight out of his head. He told me many stories of the events that relate to the Civil War on the south Northamptonshire/north Oxfordshire border villages – places that I know so well.

Mike was recently made a Freeman of the ancient borough of Northampton, and I know that this was an especially proud moment for him. As ‘a true man of Northampton County’ Mike was an active advocate for the promotion and protection of Northamptonshire’s history and heritage, which at times had placed the town at the centre of national events and politics. Mike wanted the town and county to realise just how significantly it had contributed to the formation of this nation, and for it to preserve and promote its remaining assets to the better understanding of the rest of the country. Due to his commitment to this cause Mike often came into conflict with local authorities that were either failing to protect what they are responsible for preserving, or did not understand the significance of a building or place. He was a consummate professional in terms of social media activism, and was a regular contributor to local radio and regional TV, and this made him a local force to be reckoned with. Recent campaigns helped to have the Queen Eleanor’s Cross repaired and restored, and he was also a vocal critic of plans for development within Northampton’s Market Place – not to resist progress, but to preserve that most significant space in the town, and the memories that it holds for future generations.

The last time we spoke he told me that he had crossed into my world – the world of architecture, and that he was writing a book on the significant buildings of Northampton. He shared some anecdotes of the things that he had learned, and described with real zeal the stories of the people that had commissioned, designed and built the buildings that make the public face of Northampton. I am sad to think that this book will never be available direct from Mike’s pen, and I hope that it might be finished at some point under the hand of another.

Mike Ingram was my friend – I still cannot believe we will never meet again, and I miss him greatly. May he always rest in peace.